BC farmers rally to repeal bills

A group of BC farmers gathered outside the legislature building in Victoria today in an attempt to repeal bills 15 and 52. Those two policies have stirred up an outpour of discontent with those who are part of the Agricultural Land Commission (ALC). People who are part of the ALC own land which is considered farmland or a ranch by the provincial government.

Bill 15 has changed the way the ALC is managed by getting rid of the six regional committees and replacing them with one central governing union. Members of the commission are finding it hard to reach people that govern the ALC, building frustration across the province.

Bill 52 addresses the problem of excessive land development on ALC governed properties. This bill, which was passed a year ago, restricts land owners from constructing a second building on their property for “immediate family” to live in.

ALC land owners from across B.C voiced their displeasure both today and online, with over 26 000 people signing a petition being put forth by Delta South MLA Ian Paton, who is the Liberal agricultural critic, today in the house. 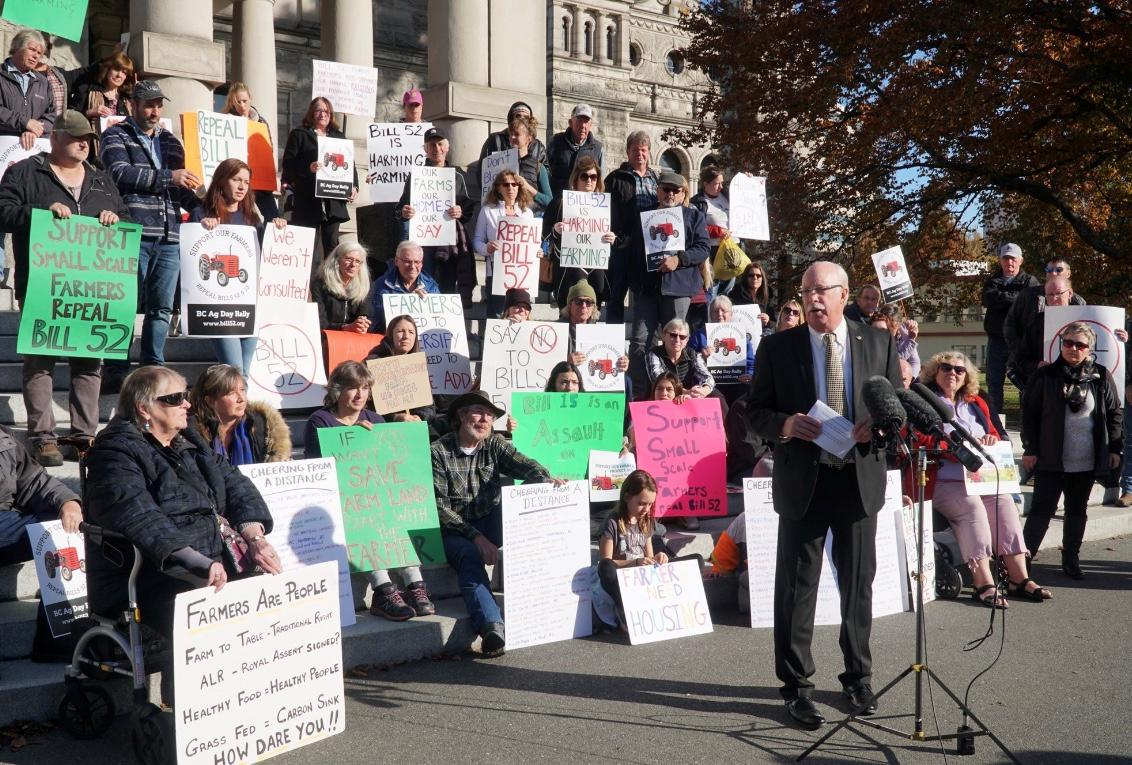 Joseph Piccolo, who is a resident on ALC property, relates bill 52’s poor reception to the housing crisis in Vancouver right now.

“Housing and prices of land are sky rocketing in BC right now, and say someone has a family, say three kids and forty acres, why not build a house for their children on that property so they don’t have to worry about paying off some huge mortgage or paying credible amounts for rent. They are the ones that are upset at this.” – Joseph Piccolo, resident on ALC property.

A key message that was present at the rally was “ We weren’t consulted”. Numerous people held signs with that message after the government surveyed less than 2500 people about these new bills.

There are over 51 000 people living on ALC governed land in British Columbia, so less than 5 percent of people had a say in these new policies.

For those people that weren’t talked to about these policies, they took to online campaigning, both with the previously mentioned petition, as well as a “Go Fund Me” page with over $1100 donated for travel costs to Victoria, and rally supplies.